Adds Red Mist, an unorthodox Melee survivor with a focus on aggressive gameplay. 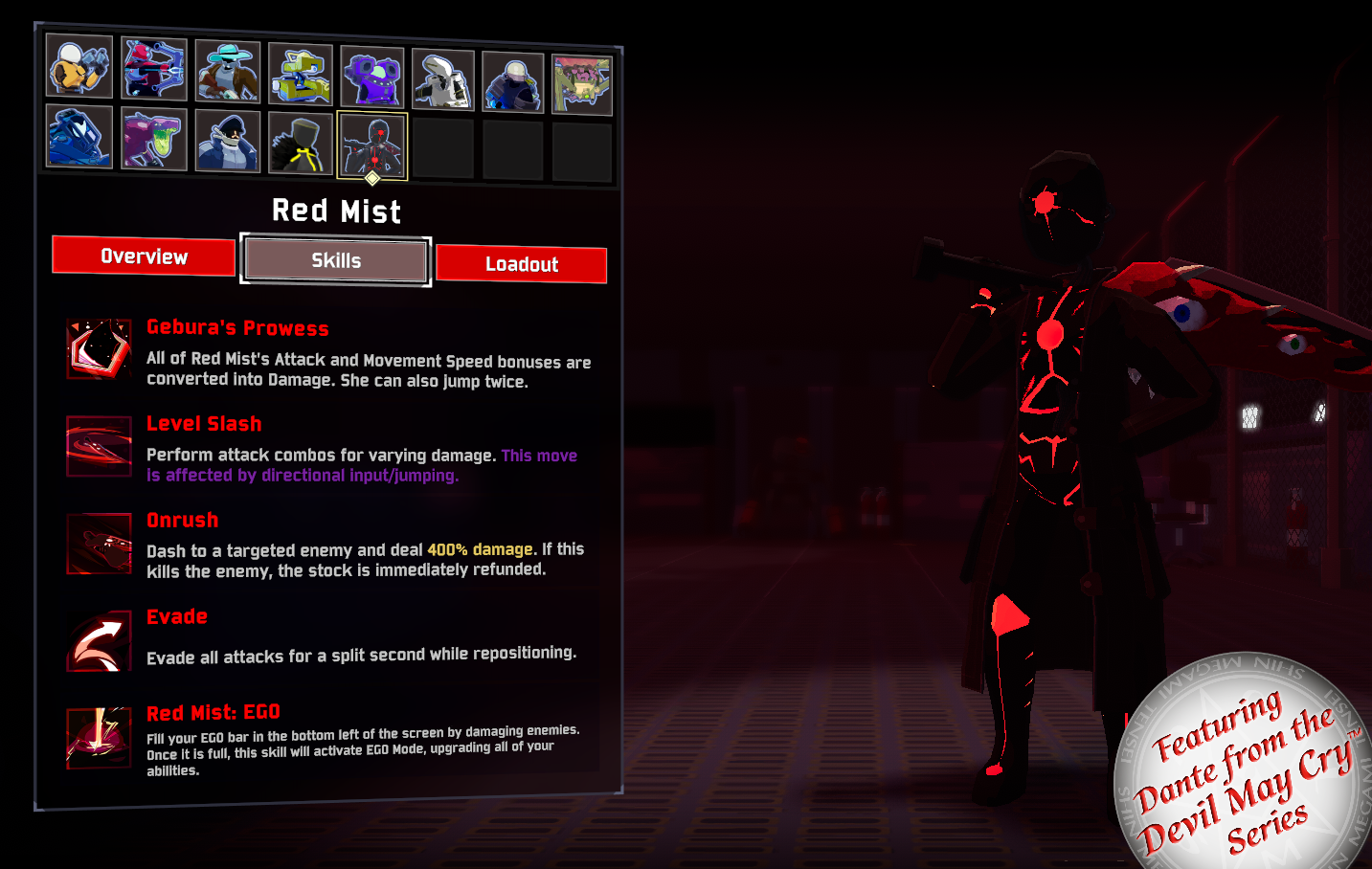 Red Mist's mechanics are going to take a lot more testing to get to a fully balanced state.
I've tried to get everything into a somewhat balanced state for Default Monsoon on release, but just by the nature of her kit there will be outliers and issues.
In particular, if you use swarms/anything that increases enemy density, she will be stupidly strong.
Balance will be ongoing with patches. 1 or 2 alternate skills will probably also be on the way.

All of Red Mist's Attack Speed and Move Speed bonuses are instead converted to damage.

Red Mist's primary skill, Level Slash, is directional and will execute different attacks with her sword, Mimicry, depending on your input.

Neutral: A standing slash with a three-hit combo on held input. The third slash is the strongest single hit in Level Slash.
Forward: A lunging stab. If held, it will continuously jab Mimicry forward for slightly lower damage. Innate armor piercing.
Side: Twisting sidestep slash. Large amount of invulnerability frames.
Back: Singular wide slash with a backstep.
Jumping: If the jump button is pressed during an attack string, Red Mist will swing Mimicry upwards in an attack that launches lighter foes. If the jump button is held, she will follow the attack upwards.
Aerial: While airborne, Red Mist will slash outwards with a two hit combo when held. Slight directional motion.
Back Aerial: Red Mist hurtles straight downwards for a ground slam, dealing damage in a small AoE. Damage scales with distance fallen, and Red Mist is immune to fall damage during the move.

Her secondary skill, Onrush, is a targeted dash attack. Red Mist will dash directly towards the targeted enemy and deal a heavy blow, moving past them a short distance. Should the strike kill the enemy, the cooldown for Onrush will be instantly refreshed. This move can be canceled by jumping.

Red Mist's utility skill, Evade, is a quick directional dodge. This can cancel attacks and will move in the given direction, with less effectiveness in air.

This ability can only be cast when the EGO bar underneath her health is charged by doing damage and killing enemies. This fills faster on later stages. Activating it will enable EGO mode, granting Red Mist an additional passive and modifying all of her moves. While in this state, the EGO bar begins to slowly drain, depleting faster over time, but can still be refilled as normal.

EGO Passive: Sprint speed massively increased. Every enemy killed grants a small linear increase to her base damage that resets when exiting EGO.
EGO Level Slash: Attacks have less startup and ending lag. Her sword Mimicry will also shift forms during attacks, and all moves hit a wider area.
EGO Onrush: If the targeted enemy is successfully killed, Red Mist will automatically recast Onrush, targeting the lowest-health enemy within range and line of sight. This repeats until it fails to kill or no enemies are in range.
EGO Evade: Evade becomes a fast, short-range directional teleport with less invulnerability frames and improved aerial mobility. It also does not cancel attacks, instead pausing the motion and finishing it after the teleport.
Greater Split Horizontal: While in EGO mode, her special becomes Greater Split Horizontal, with a 20 second cooldown. Red Mist will leap a short distance in the air and unleash a single slash that deals a huge amount of damage in an extremely large area.

For bug reports, feedback, and questions, feel free to message Emily on Discord at Emily (Rire)#0001.

SFX volume balancing is in progress
Item positioning/display is not finished for her
Red Mist's coat uses compute shaders, so very old graphics cards may have issues

0.2.2
- Fixed lockup caused by not having Ancient Scepter installed

0.2.1
- Onrush can no longer be activated without a target
- Basic attack can now be cancelled into Onrush, EGO Activate, or Greater Split
- Onrush can now be cancelled into Dodge, EGO Activate, or Greater Split
- Onrush should now properly activate on-hit effects
- Onrush should no longer be able to gain over max charges
- Added Standalone Ancient Scepter skill
- Editted boss stage chat message
- Added footstep FX
- Forward and Back Level Slash distance increased
- Back Aerial ending lag reduced
- Added light overlay to the character during IFrames. Can be disabled in config.
- Updated ability icons!

0.1.1
- Initial balance pass, expect more soon
- Focus on making non-EGO mode more usable and less punishing
- Adjusted non-EGO dodge timing to be quicker
- Non-EGO dodge now moves you slightly further while in the air
- Sprint speed bumped up slightly for non-EGO and EGO
- Forward attack got a slight damage buff
- Neutral attack was made slightly faster and got a damage buff
- Cancel timings of all non-EGO moves were eased to be slightly less punishing
- EGO moves got slight cancel time adjustments to feel more consistent
- EGO Neutral attack no longer has end lag on the third swing, to feel more aggressive
- Aerial attacks will no longer push enemies away/up
- Non-EGO aerial attacks now allow for slightly more movement, matching EGO
- Per-kill buff while in EGO mode now only applies damage to your attacks, not to your equipment/items
- Attack Speed/Move Speed to Damage conversion was made more generous (and more accurate)
- Evade and Onrush have swapped positions. Evade is now Utility, and Onrush is secondary. Get those backup mags.