Includes an entirely original survivor and a new late game boss. The survivor is a close range caster with very high damage potential but no mobility and limited defensive options. You may recognize the boss from RoR1.

﻿This mod adds:
A totally new survivor built entirely from scratch. Only reused one of hopoos meshes.

Note that in order to use this mod in multiplayer, everyone must have this mod installed and be on the same version. It takes the same networking approach as the vanilla game, meaning it assumes that every client has the same, or nearly the same, internal setup in order to greatly reduce the amount of network traffic. 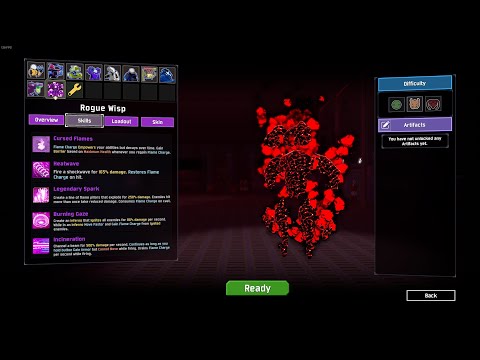 General tips for playing them

If you run into any kind of compatibility issues with other mods, let me know on my discord or via DM. I would very much like to avoid as many of these as I can.

With that being said, due to the scope of this mod I end up hooking and touching a very large portion of the game code. Because of this, there will be compatibility issues. In addition, not all issues can be resolved solely on my end. Sometimes it will require changes to the other mods as well.

As a general note: if your mod is working in an area where it may end up working with the wispy gameobject, make sure to air on safe side with null checks (which you should be doing anyway). Some of the character's structure is a bit unothodox from vanilla survivors, particularly around the model and skins area to accomodate my custom skin system, and allowing for the skinning of projectiles and other effects.

Also note that this mod does overwrite a few of the hooks in r2api to clean up their functionality. None of these hooks will cause behaviour any different from standard r2api, but they may log a warning for some networking issues that r2api isn't set up to detect, such as skills that are not registered fully (LoadoutAPI.AddSkill(typeof(YourStateHere)), before you call new SerializableEntityStateType)

To make things easier, I've listed all the methods I hook below.