Adds an artifact to the game which destroys items of your inventory if you take damage but gives you items if you kill enemies.

Adds an artifact to the game which destroys items of your inventory if you take damage but gives you items if you kill enemies.

Special thanks for designing the icons belongs to:
Oroshibu

Mods used to create this mod

And the Multiplayer UI support is based on the Example of MiniRPC:
https://github.com/wildbook/R2Mods/tree/develop/MiniRpcLib

What does this mod do

With the artifact active, players have a chance to gain items after defeating monsters, but lose items upon taking damage.

There are three new UI-Elements added. There are two sidebars which show the last ten gained/lost items and a progress bar which fills till you get an item.
In the Sidebars are only the items shown which you obtained/lost by the mod. The UI resets every stage.
In the following image you can see these elements: 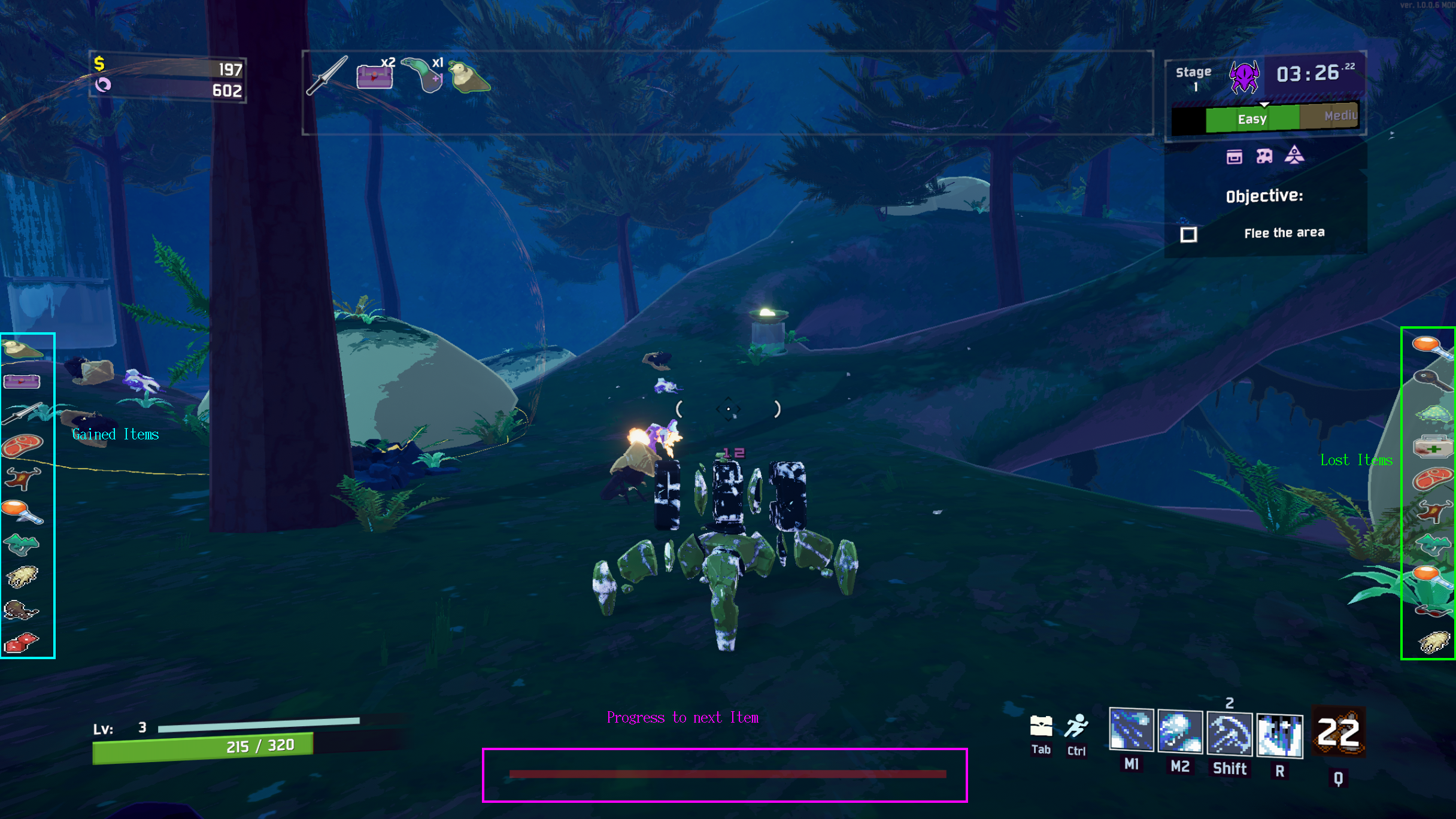 If you don't like some or all of the added components you can disable them in the settings. Additionally you can turn on a chat output in exchange.

When do i get an item

There are two possible gamemodes.

The calculation for the required kills is:
(totalItems - currentStage * averageItemsPerStage) ^ exponentTriggerItems
totalItems is the current item count of each character. CurrentStage is the number of stages completed and exponentTriggerItems and averageItemsPerStage can be changed in the config file.
For example you've 20 items and are on stage 5. The configured averageItems are 3 (default). That means you've to kill (20-5*3)^2=25 enemies to get one item.

On the other hand the possibility increases if you've more items than you should have to lose more than one item. The formular to calculate that is:
(totalItems) / (maxItemsPerStage * currentStage)^exponentailFactorToCalculateSumOfLostItems
maxItemsPerStage and exponentailFactorToCalculateSumOfLostItems are configurable and have a default value of 7 and 1.5.
For example you've 50 items, are on stage 5 and have the default values so you calculate:
(50 / (7 * 5))^1.5=1.7
So you'll have a 100% chance to lose one item and 70% chance to lose another.

The Sacrifice like mode can be enabled in the settings. If it's enabled you've a chance to get an item with every enemy. The base chance for getting an item is 10%.

After you lost an item you'll get a short buff that prevents you from loosing another one. The length of that buff depends on the difficulty and can also be configured with the config entitys "timeAfterHitToNotlose".
The default settings are 0,8 second protection on Drizzly, 0,2 on Rainstorm and 0.05 seconds on Monsoon

Custom character don't have character specific settings by default. But you can add them in the config file. To do so edit CustomCharacters and set the values in json format.
e.g.:
[{"Name": "AATROX_NAME", "MultiplierForTimedBuff": 2.0, "BonusItems": 1.0},{"Name": "MINER_NAME", "MultiplierForTimedBuff": 2.0, "BonusItems": 2.0}]
The name of the character is written in the console after killing an enemy or loseing an item. You can add as many characters as you need. Just add them seperated by ",".
You don't have to escape the " by doing \" but the default setting is escaped.

Please add an issue to my github repository:
https://github.com/SirHamburger/ArtifactOfDoom
You can also reach me in Discord (Sir Hamburger#8447)

Reupload since I uploaded a wrong manifest

Fix for Progressbar after taking an item

Temporary fix for compability with TinkersSatchel