The Umbral King of Nothing uses shadows and clones to overwhelm his enemies.

A convenient API for adding BepInEx ConfigEntry's to a option menu

Accursed Mithrix reworked variant with clones and new Phase 4 (For more info on the base mod https://thunderstore.io/package/Nuxlar/MithrixTheAccursed/).

There's an Obelisk where you first spawn on the moon. Activate the Obelisk if you want the challenge of Umbral Mithrix or don't for the vanilla Mithrix experience.

The mod is highly configurable. You can edit config values in-game and during runs through Settings -> Mod Options -> UmbralMithrix. Stats are calculated at the start of each phase so if you're blasting through Phase 1 you can make the other phases harder. If the in-game values are too limiting you can edit the modman config to input custom values. 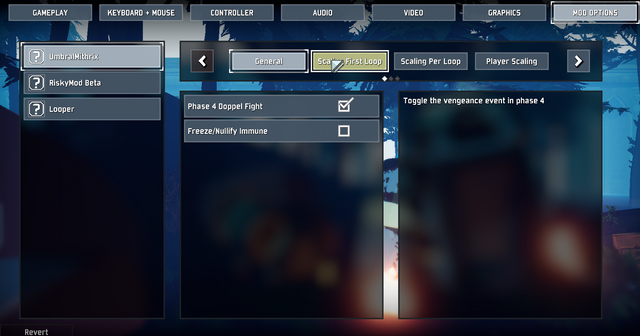